Sometimes, for a person of a certain age, it may be too difficult to learn something new.

Those of us who love our 21 Century digital tools, often surmise that using technology can help aging elders cope with the weaknesses that occur as an individual grows, well, older. It’s true that individuals, as they age, can adopt various new technology tools to assist with certain tasks, and I wrote about the mechanics of older adults adopting new technology in a recent post, Elder Tech Skills Require Lots of Practice: Seven Recommendations.

The newest may not be the best in every situation.

But at some point, no matter how much it might help to use an iPad or a recorded book, or another whiz-bang 21st Century tool, a person’s physical or memory challenges may preclude learning something new. Or they may not want to bother.

This happened to a friend whose mom had advanced macular degeneration. An inveterate reader, this woman was suddenly unable to read as much as she used to. For a while, large print books worked, but eventually those also became too hard. Well-meaning friends kept telling my friend to help her mother use recorded books, but the mechanics of using the equipment were just too difficult, even when everything was set up and only a few buttons needed to be pushed. 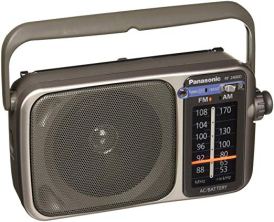 This is the radio that I found.

I found a similar situation with my dad. He loves music, and always, as far back as I can remember, had a boom box, or walkman, or the stereo playing mostly classical music. Gradually the stereo became too difficult, then the walkman was too challenging to manage, and finally, the boom box, with all its symbols also went by the wayside. I thought and thought about how to bring back music into his life, and one day, looking at a catalog of electronics equipment I found something that might work.

There on the page was an old-fashioned Panasonic radio, the kind with dials and a telescoping antenna. Perhaps, I mused, the technical skills required to use that very old radio (I hadn’t even seen one since sometime in the 1990s) might just be from a time far enough in the past and the steps for using it might be imprinted in his brain. I wondered whether memories and information about the older model radio, a type that he used many years ago, might be stored in his long-term memory and make a similar radio easy to use. If I was right, he might automatically turn the dial and get his music.

So I ordered the radio, and indeed, my surmise was correct. I handed the radio to dad and plugged it in. Without missing a beat, dad lifted up the antenna turned on the dial and found some classical music.

In our rush to adopt new digital tools, we sometimes try to get older adults to join in the fun when a simple solution from the past works perfectly.