If your fragile elder parent is in long-term care or assisted living and memory issues are ongoing or developing, take a few minutes to read or listen to a December 9, 2014 National Public Radio (NPR) broadcast, This Nursing Home Calms Troubling Behavior Without Risky Drugs. The piece, by Ina Jaffe, describes a long-term care community, Pathstone Living in Mankato, Minnesota and how the staff went about lowering the use of antipsychotic drugs. 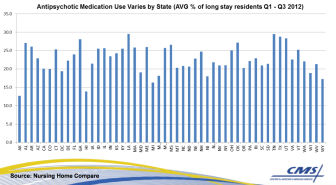 CMS graph depicting state-by-state drug use in long-term care. Click for a larger version. Link to CMS graph is below in the resources section.

The nursing home aimed to reduce the number of residents who were taking antipsychotic medications. Although they set modest goals for the first year, they experienced great success, discovering that they could take most people off the medications.

By extending the policy to other long-term care communities, the non-profit organization that runs Pathstone along with other long-term care communities, the organization set a new goal to reduce the drug use by 20% in the first year, but instead they reduced it by 97%. These communities achieved their goals by looking at each patient and seeking ways to directly address the reasons that the medication was given to each person in the first place.

I was struck by how many people are put on an antipsychotic for a specific reason but then ever taken off. I was also struck by the number of falls that occur to people taking these drugs,

After my mother-in-law’s stroke she experienced some post stroke dementia as well as frightening nightmares. Her doctor suggested an anti-psychotic, and we took a long time to decide whether or not she should take it. Because of her night-time fears, we finally decided to try the smallest dose possible. And then we asked the doctor to cut that in half. Mother took it right before bed and slept well, finally free of the frightening images. However, we carefully monitored her and the drug to be sure that there were no side effects and especially no effects that made her less active during the daytime.

A Few Additional Resources About Elders and Antipsychotic Medications

One thought on “Medicating Elders in Long Term Care: Is It Necessary?”