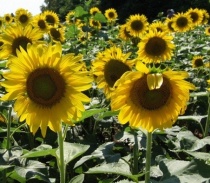 I am tiring of “the boomers are coming” dire warnings that seem to be everywhere. Boomer bashing is nothing new — it’s been going on  since it became clear that the demographic cohort would be a large one.

Yes there are problems with so many people growing old in one generation, but it also means there are lots of people who have time and energy to give back. In my life and in the lives of the boomers I know well, we have time after time given more than we’ve received. I expect this giving to continue.

Whether we were fighting for civil rights, starting careers later than usual because we worked on projects that supported other types of change, or continuing throughout our lives to contribute major amounts of community service, giving back has always been a theme in our lives.

What a delight to read Dorothy Sander’s April 11, 2012 post in the Huffington Post describing a “new way of aging” that involves deepening a vision about the many things that are left to be done even as we grow older. Sander, the founder of Aging Abundantly, expresses ideas that many boomers share.

We had a vision then. We have a vision now. It may not be as clear as the anti-war sentiment was then, but its focus is sharpening with each passing year.

Through it all, then and now, we remain standing, strong, anchored and faithful to our ideals. We will give back more than we take.

Read the whole piece, especially the three profiles of women who are finding great satisfaction forging ahead in areas that affect change.

I believe that when a final story of boomer retirement is written, the evidence may show that they gave back far more to society in later years  than they took for themselves.