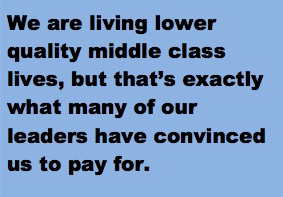 I’m an adult child with aging parents, and all my life I’ve looked around with awe, observing what people my parents’ age and older have left for their families and their world.

Bridges, highways, businesses, savings accounts, good schools, paid off mortgages, parks, protective regulations, Medicare, social security, you name it. Even foreign aid to build up countries that had been our enemies during World War II.

The generations that preceded us, and especially the greatest generation, had a finely tuned respect for public service. Civics was important to them, and they understood how building a government, whether national or local, encouraged participation and helped others. Did I mention a love of education?

They also believed in paying their way with taxes — none of this lowering taxes and increasing debt and not paying for wars. I’ve lost track of the number of times my parents and grandparents told my brother and me that  “…taxes are a privilege in a democratic society…  for all of us, not just our family.” These were not affluent people talking.

We adult children and those who have followed us have mistreated and trivialized the gifts that were given to us. 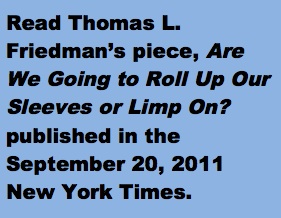 Today I can’t look around for even a moment without observing how we’ve opted not to keep our world in good and tidy shape — all because so many of us insist that we should not have to pay appropriate taxes.

Why can’t we do better? Please don’t say it’s a boomer thing, because it’s not. The “it’s so easy just cut taxes” folks come in all ages, shapes and sizes, specializing in what Herb Strentz over at Nieman WatchDog blog calls folly. I call it making things up.

Somehow earlier generations — and their leaders — had vision, optimism, and, yes, the grace, to understand that they had to leave the world a better place than when they arrived, and not just for themselves. Even when the economy soured many people still believed in their civic responsibilities.

As I observe crumbling bridges, broken streets, bankrupt local governments, and deteriorating schools, I think I know what’s happened to the vision and legacies of our parents and grandparents. It’s evolved into made-up stories that if we cut and cut and cut taxes, we’ll all get better — stories simultaneously encouraging greed and gaining momentum since the late 1970’s. Instead of getting better we mostly have lower quality middle class lives — along with more poor people, more broken down things, fewer jobs, and weaker schools.

We just continue to destroy the legacies that our parents left to us.