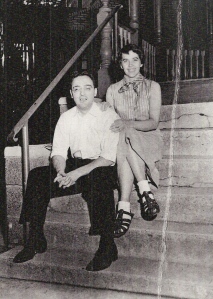 Mom and Dad about a year after this story on the steps of Dad’s church in Union City, New Jersey,

Those of you who have read even a few of the posts here at As Our Parents Age know of my ongoing series, iPad for Dad (read the first in the series). A little over a year ago, I splurged and bought my Dad an iPad for his 87th birthday. My goal was to encourage him to write and more specifically, share his writing with me and other family members. A committed journal writer, Dad’s diaries fill many shelves, spiral notebook after spiral notebook, pages covered with handwritten entries dating back to 1947.

The iPad has encouraged hours and hours of journal writing, pieces that can easily be sent around to family members — all he has to do it hit the  picture of the envelope and his thoughts are on their way to me or to a friend, to his granddaughter, Rachel, or his niece, Sandy. To be exact, 214 journal entries have been e-mailed to me over the past year, and at least every other one includes something new (to me) about his life or our family. Who knew?

What I do know, however, is that iPad is a gift that keeps on giving back to me, as Dad writes and remembers and writes some more. And his ideas, insights and stories about our family keep on coming.

Your parent can do this too, whether with an iPad or with a digital recorder. And other memory preservation options are available such as Life Echoes, a company that provides the whole package, but setting families up with recorders and then transcribing, scanning pictures, and publishing personalized family   history books.  The important thing is to know that all of our parents and elders, even when they grow increasingly fragile, carry around stories and family memories that we want to know and preserve.

Learn more about Reinhold Niebuhr at the NPR program On Being.

Below are excerpts from today’s post in which Dad describes his encounter as a young minister with the distinguished theologian, Reinhold Niebuhr. I did not know the whole story until today.

My senior pastor at Summit First Baptist Church, David Barnwell, was Alumni President of Union Theological Seminary; and in that capacity, he was able to invite Dr. Niebuhr  [the seminary president] to give a lecture at Summit, New Jersey … Summit’s Athenaeum [lecture series] was an opportunity to listen to lectures of well-known persons from the cultural center – New York City, and specifically, the Morningside Heights – home to Columbia University, International House, The Jewish Theological Seminary and, of course, Union Seminary where Dr. Niebuhr taught.

It had been arranged that Dr. Niebuhr would be driven from his apartment in Morningside Heights to Summit’s high school assembly hall, 25 miles distant; and then home again after lingering at a reception; but the driver for the occasion became ill, and my mentor, Rev.David Barnwell, appealed to me. I had taken many trips east into the Lincoln Tunnel and into the city; but I had a 1936 Dodge and wasn’t sure of its idiosyncratic performance.

Nevertheless, after the lecture, I was pressed into service and I had a most wonderful time – driving across the Secaucus meadow into the tunnel, north to Morningside Heights – two hours with Reinie – talking about the new stress upon an Orthodox Christianity to reform the Social Gospel Christianity that brought about so many reforms, but seemed to lag with the fearful experiences of WW II — of Dresden, Hiroshima, Nagasaki – and of the courageous experiment called United Nations. We chatted about Adlai Stevenson, soon to be a presidential candidate. All this in two hours across the Secaucus flats…

This was 1948. I never dreamed that in 1978 I would be curator of the Niebuhr Exhibit at the Lincoln College McKinstry Library in Illinois, and that I would discover that Adlai Stevenson and Niebuhr exchanged many letters in earlier years.

If you enjoy this post you may also enjoy my post, Aging Parents-Untold Stories: Grandma, Why Didn’t You Tell Me?!

9 thoughts on “iPad for Dad, #18: Discovered Stories from My Family’s Past”