For years I have read articles by Pulitzer prize-winning reporter Saul Friedman — an experienced journalist who writes engagingly on just about everything. His pieces are well-researched and timely, and often I recommend them to friends and family. When Freidman — I really think of him as Saul — left Newsday we mourned, but then suddenly he appeared on the blog Time Goes By, writing the Gray Matters and Reflections columns. 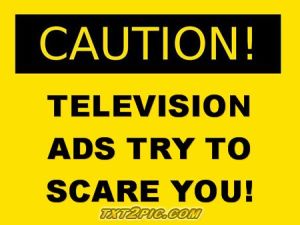 Time Goes By, is a must-read. He writes about seniors, fear, lack of knowledge, manipulation, and misrepresentation. When you finish reading, take a look at some of his past columns and then pass on the links.

Elderly Americans are increasingly manipulated by the advertising. Selling medications, political ideas, and insurance, these ads use demographic tools and strategies that take advantage of the worries and concerns in seniors’ lives, not unlike the way ads manipulate children to want toys and sugar-filled food. But seniors are not children and do not deserve to be treated like little ones.

Media literacy skill, the ability to deconstruct and see through media strategies, is critical. Televisions are friendly and reliable companions, so we do not expect to be frightened or manipulated or question what we see and hear — unless it is a compelling, old-fashioned police/detective show.

Most of our parents and other elders lack evaluation skills to help them manage and process the fear-inspired advertising that appeared on their televisions during the recent media-dense election cycle. Content aimed to trigger anxiety was continuous, and there was no way for viewers to figure out who was doing the advertising. They needed to know how to ask questions about what they saw. Sadly, sometime in next two years many seniors will discover that the people they voted for are the very individuals who will try hardest to make the most feared changes in Medicare and Social Security.

Here’s a report on fear from NPR.

After media literacy training, if people still support one point or view or another, that’s just fine, but at least they will base their decisions on issues rather than emotional triggers.I have no difficulty with opposing views (well, maybe a little bit), and I can handle an election, like the one that just happened, that elects a lot of people with whom I disagree, though I don’t like it. What is terribly wrong, however, is how increasingly emotional advertisements frighten and mislead older people, encouraging them to do things that negatively affect their ability to live healthy and secure lives.

One thought on “Seniors and Media Literacy: Voting, Fear, and Manipulation”