Periodically a national issue becomes so significant that our elders can address it best — and I mean the elder-elders — the people, now in their 80s and 90s — who fought to stop Hitler and the Holocaust. Elder-elders know what can happen when you demonize a religion, the way some people are demonizing Islam today.

I hope our these elders, those still living, can raise their voices to say, “Stop!” and go on to give a collective history lesson to younger generation, reminding us that the United States Constitution guarantees religious freedom for everyone. Oh, and they can tell people to stop throwing around the word Nazi. The elder-elders have seen — up close and personal — how the Nazis were responsible for the deaths of tens of millions during World War II.

Called “the greatest generation,” these senior elders put themselves in grave danger and saw countless friends and family members die, all in a quest to stop Hitler, stop the murder of Jews, and basically save the world. Those 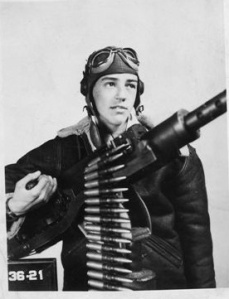 who did not fight found other ways to help.

As a child, I grew up hearing stories about the war and the evils of Hitler. I knew people with physical war injuries and men who were so emotionally injured that they could never live a normal life again. I also knew immigrant Americans with tattoos on their arms. The older generation in my life, today’s elder-elders, taught me that no matter how evil a few people might be, you don’t denigrate the group, and if you don’t understand a religion, show respect and try to get to know the people.

Which brings me to Uncle Sherman, a B-24 tail gunner in World War II and a member of the “greatest generation.”

My mom lovingly remembers a thoughtful and protective big brother who could take apart, fix, and put together anything. He was kind and honest, and while he wasn’t great in school, he did amazing things with his hands. An idealistic young man, Uncle Sherman wanted to volunteer at age 17 because he abhorred the evil and murders in Germany and wanted to help save the world — beliefs formed in Christian Sunday School (a Baptist Church). He understood that people need to worship freely and that you cannot demonize others without terrible results. His mom, my grandmother, made a deal with him. She would sign the papers as soon as he graduated from high school. He graduated, she signed, and he was still 17 when he went to war.

Uncle Sherman in Front of a B-24 Bomber

In Italy he flew mission after B-24 mission over Germany and Austria. One morning he was grounded with a sore throat, and that day his plane was shot down. My uncle blamed himself for the loss of that plane — experiencing an ongoing emotional death for the next 60 years — until he died three years ago. He suffered from debilitating post-traumatic stress syndrome, though for the first 45 years no one called it that. I never really got to know Uncle Sherman because of these problems.

My uncle’s life was destroyed. He made an ultimate sacrifice — fighting to stop the demonization and hatred of others. He knew what he was fighting for — to stop that demonization and ensure religious freedom, and despite his disability, he could have explained this to people right up to the day he died.

Maybe our elder-elders —  the only ones who really remember that time of extreme religious persecution, when people did hateful things, threatened to burn books, and spoke recklessly in emotionally charged phrases — can speak out and with their immense elder wisdom telling younger generations to stop today’s extreme behavior toward Muslims (as well as others), most of whom want, just like the rest of us, to protect their kids from terrorism.

Only once did I ever hear Uncle Sherman speak in a calm voice, free from his devastating disability, but  I remember his voice had a gentle midwest inflection. When I recall that day, I think about how he would have been a wise elder-elder, had his life not been derailed by a terrible war.

So I can easily imagine his voice simplifying the mosque building issue and saying, “Leave ’em alone. They just want to worship.” Simple.